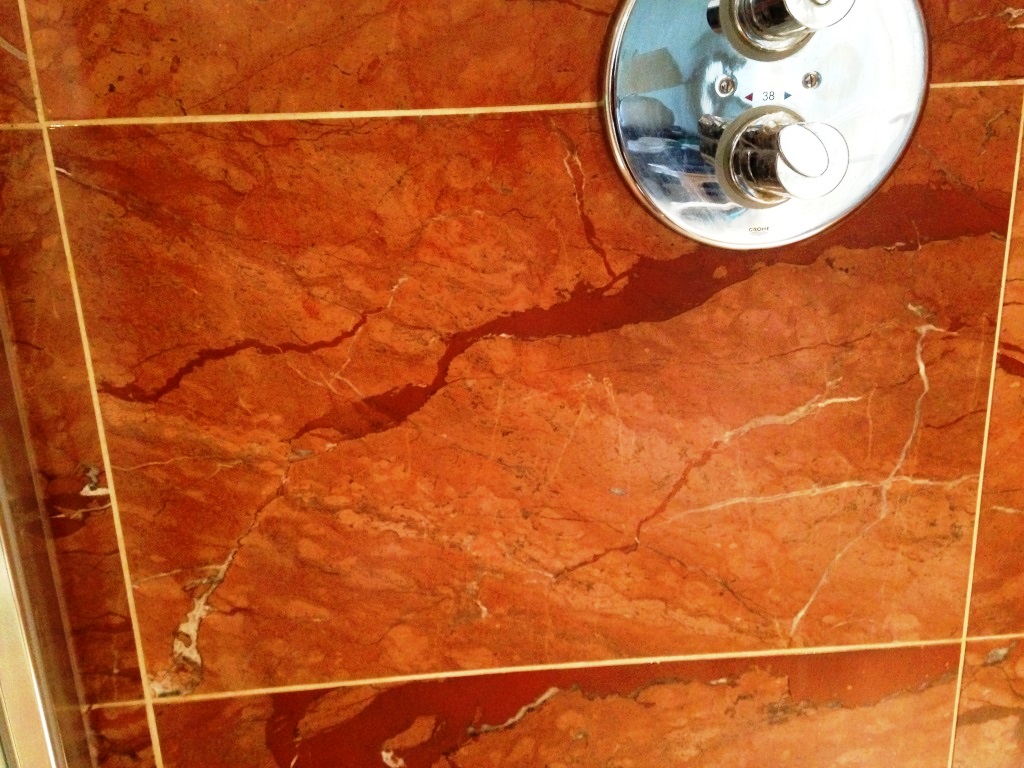 We were recently received a referral from a well-known house cleaning company who needed some assistance to resolve an issue with a Marble Tiled Shower at a Georgian property in Ringmer. Unfortunately one of their staff had sprayed a Cillit Bang cleaning fluid onto the tiles to remove Limescale deposits and had marked the tiles with white streaks which could not be removed. Now Cilit Bang is a very strong product and although it has a reputation for tackling tricky cleaning problems it contains Benzenesulfonic Acid which like any acid should not be used on Stone as it will damage it. If you check the internet you will find this problem is not uncommon and numerous people have experienced the same issue, the good news is there is a solution.

Using a spray bottle containing a dilution of Tile Doctor Pro-Clean and a set of small Diamond encrusted burnishing pads attached to a handheld buffer I went to work on the tiles stripping away the existing sealer and bringing back the surface of the stone. During this process the damage to the tiles started to fade and once the sealer was removed the tiles took on a washed out appearance which was to be expected at this stage.

After drying any wetness with a heat gun I left them for a while so they could be sealed. Assisted by the underfloor heating the tiles soon dried out so after about half an hour I was able to apply a coat of Tile Doctor Ultra Seal which is an impregnating sealer that leaves a natural look. For the next couple of hours I added three more coats during which the tiles gradually came back to their previous colour. Each coat has to be fully dry before the next once can be added on. During the drying process I took the liberty of cleaning the customers shower unit, not something I’m in the habit of doing but it passed the time.

As you can see from the photographs on this page the white streaky damage caused by the Cillit Bang has now been removed and the surface looks as good as it did before.